“That’s too crazy for words,” my husband said. “Why are you doing that? Put that bag away.”

We were talking in the car as I munched barbecue-flavored potato chips. To be fair, it was well past lunch and the backwoods gas station didn’t have much choice. This is the return trip from visiting my son who lives in another country and I’m already missing him.

“I don’t eat these often I told him,” even though this was my fifth or sixth family-sized bag of chips in the past two months since my stepson died (but who’s counting?).

Before that, it had been years since I’d eaten a bag of chips. I may have had a handful at a party, but I can’t remember. “I don’t even like them,” I said.  That’s what prompted his comment about being crazy.

They’re greasy, and barbecue isn’t my preferred taste. Even my favorite vinegar-flavored chips quickly become overpowering—too salty and sour after a single handful.

“You really must be an emotional eater. You’re telling the truth about that,” he said. He doesn’t understand my emotional eating, but that’s OK, because even after years of study, I don’t fully understand it, either.

As I held a few greasy chips in my hand, contemplating his words, even I could see that the answer to what I was feeling wasn’t going to be found in that bag of chips.

“He’s right,” I thought to myself. “This is crazy.” And I put the bag in the back seat, giving it a shove so it couldn’t easily be retrieved.

If it weren’t littering, I would have thrown it out the car window as my way of saying “goodbye—I don’t need you anymore.”  I probably should have, because I noticed my husband eating those same chips late that night at home.

Maybe he understands it more than he lets on.

An Emotional Eater’s Stages of Grief

Some experts say grief comes in stages. Mine are chocolate, heavy food, any food, and crunch. I’m in crunch time.

With three deaths in my immediate family, this has been the year of grief. First my husband’s father. Then unexpectedly, my father. And shortly after that, my husband’s youngest son.

The death of a child is inarguably the deepest grief a parent can experience. Having now seen it up close, I can tell you it’s brutal. I wasn’t this boy’s mother, but there are still times when my grief is so raw and deep that it goes past my ability to feel, much less cope. I have no idea how my husband is managing.

This pain is unlike the grief I felt from my father’s death. Who knew there were so many variations and depths of grieving?

And despite the progress I’ve made toward moving beyond emotional eating, I find myself falling back to eating my way through the feelings.

At first, I was horrified. A bit of chocolate is one thing, but my recent eating is a whole other level. I’m fearful of reverting to old habits. And I’m embarrassed to be a psychology of eating coach who is using food to manage feelings, even though I’m grateful to have a coping method (albeit imperfect) that gives me some relief.

As time goes on, however, I’ve realized that this relapse into emotional eating has some advantages. I’m re-experiencing life before healing—only this time I can see more clearly how my thoughts and feelings drive my eating.

The chips in the car feel like the end of this stage of grief eating. I’m pretty sure my chip craving is over. I’ve walked down that aisle of the grocery store several times since without even a glance.

What comes next is still unclear, but I’m looking forward to returning to my normal eating. After the rich foods on this trip, I’m craving vegetables and salads. Whether I can continue grieving without the crutch of emotional eating remains to be seen.

In retrospect, I realize that peak crunch came a few weeks ago. My husband and I were talking about his son and our anger flared—at the situation and at each other. Feeling the need to crunch, I pulled out one of the big bags of chips I’d asked him to get on his last grocery run. Together we vented, and when those chips were gone, I silently pulled out a second bag, and we kept going—crunching our way through our pain, confusion, overwhelm, and anger.

Crunch time is an actual thing. In the world of eating psychology, the desire to crunch is often affiliated with anger, as well as anxiety, frustration, and stress. The act of chewing and crunching gives some relief from these emotions. As social animals, it’s a more acceptable alternative to snarling, growling, or biting the object of our threat.

There’s nothing wrong with wanting to crunch. I like crunchy food in general, and I usually fulfill my crunch quotient with raw vegetables, nuts, and seeds, and the occasional crouton. Who knows if this is because I’m stressed and anxious by nature, or just because it’s what I like. It’s only when the desire for crunching devolves into meals primarily of chips that it becomes a wake-up call.

What Are You Feeling?

I remember the day my crunch craving began. None of us wanted to go to the grocery store where we would be seen and have to talk. The casseroles and soups brought by family and friends were gone and what was left was a large quantity and variety of bread.

In a hopeless effort to get some eating satisfaction, I stood at the kitchen counter slicing soft pieces of each one: one with a sweet filling, one with a slab of butter, one with a slice of cheese on top of the butter Dutch style. Nothing helped.

Then I spied what was left of a bag of chips.

“What are you feeling Lisa?” I asked myself as I crunched, prompting an enormous outflow of emotion and tears.

The first day in an unguarded moment I had expressed that I felt both sad and mad. A visiting friend promptly told me not to let anyone hear me say that. Immediately I felt shame. Wow, I’m not good enough to even grieve right, I felt as my face burned.

Yet less than 30 minutes after this friend left, several close family members expressed the same feeling. I wasn’t the only one. We all felt it in some way.

Emotions run through us. They’re real, and they’re true in the sense that they happen.

Emotions are chemical reactions that are triggered by what’s happening inside our body. In this sense, emotions are one of our senses like sight or touch. And they are the only one that gives clues as to what’s going on inside.

Where people get mixed up is in the interpretation. A feeling is your interpretation of the sensations in your body that are prompted by the flow of emotion. That’s why a queasy stomach and weak knees is interpreted as love, while a hot flash of energy is read as anger.

But like translating any foreign language, emotions can be misinterpreted. For example, in a stressful situation, you may think you’re experiencing anxiety, but this could be masking a deeper emotion that you’re not ready to face. . Many times, you can be so focused on the immediate reaction, such as anger, that you miss an underlying emotion like sadness.

An old pattern could also trigger an interpretation of your emotions. In my case, this pattern is hear feedback, jump to the conclusion that its criticism, feel shame, then have an overwhelming desire to eat in order to soothe.

The Value in Anger

Even though it feels counter-intuitive, anger is not only natural but beneficial. Anger is an emotion that evolved to give us the strength and clarity to get our needs met. Anger means there’s been a boundary violation—that your needs haven’t been respected.

The death of a loved one is perhaps the ultimate boundary violation. After all, they died when you need them alive. You’re hurting, and they aren’t here to help.

As the saying goes, “under stress, we regress.” Despite knowing all this, I internalized my friend’s message and reverted to my childhood strategy of soothing emotions with food.  Even though I knew better, in the fog of that day, I interpreted the message loud and clear that my emotions weren’t valid. And I felt the full shame of that.

It’s not my friend’s fault. She meant well, and my conscious mind understands that she was trying to protect me because she cares. After all, she didn’t actually tell me my emotion wasn’t valid. She only warned me not to repeat it to the others whom she felt wouldn’t understand, and that’s fair. Just because you are feeling something doesn’t mean you have to express it to others. It’s totally on me that I let her comment trigger my default reaction.

Since I couldn’t express what I was feeling in words, I sought another way. I could keep my emotions at bay by eating. And when I finally let my emotions come forth fully that day at the kitchen counter, it was crunching that I needed to soothe me and dissipate the discomfort.

The small amount in that initial bag of leftover chips left me unfulfilled. Chips became standard for every grocery trip until I was able to recenter and gain clarity.

This is what’s happening when you find yourself eating in unwanted ways, like binging or overeating or eating foods you don’t even like. You aren’t crazy.  Your sensitive points were triggered, and you reacted in old, habitual ways.

My triggers were anger together with shame over my anger, and a chip bag within sight. Note that there are two parts to this process. The chip bag itself didn’t trigger my eating. If I hadn’t been struggling to cope with uncomfortable emotions, I wouldn’t have been attracted to the chips.

It’s important to reflect on your emotional eating experiences with self-compassion. Self-compassion is empowering because it helps you step out of feelings of failure and away from the fear of never being able to change.

I didn’t start this blog to be the grief whisperer. I’m eager to write about other emotions and reflect on other eating challenges.

But while I’m in the thick of it, there’s much to learn from grief. It is ever present and inevitable in our lives, in both small and large ways. As I’ve written before, staying present with grief and sadness is an important form of emotional housekeeping.

I’ve learned that I don’t have to fear food and that emotional eating is part of the human experience. I can listen to its messages and learn from each experience. Crunch time won’t last forever.

I can see that chips alone couldn’t ease my anger and pain. But sharing those chips while sharing emotions helped. In retrospect, I’m glad my husband and I could crunch together and vent.

Maybe those chips were the healthiest thing for me at that moment.

← The Woman In The Window The Upward Spiral → 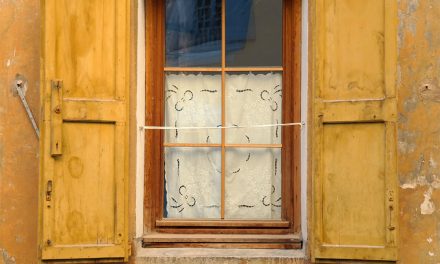 The Woman In The Window 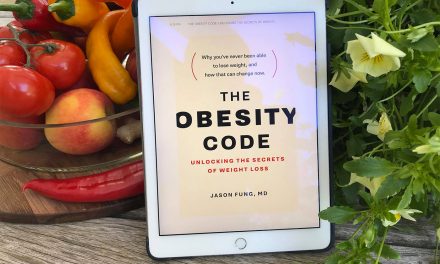 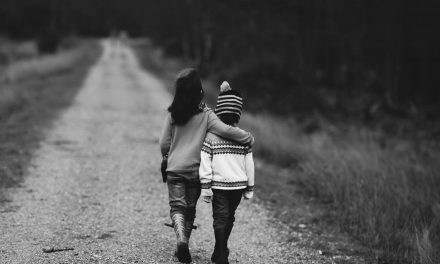 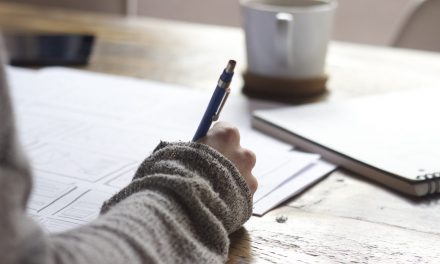 A Letter From My Body